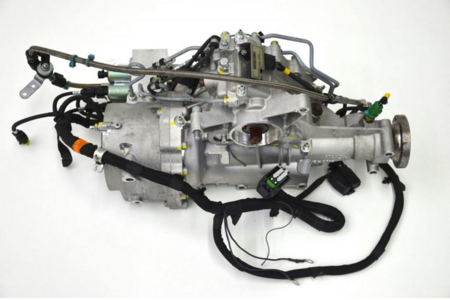 Ferrari 4RM is an intelligent 4 wheel drive system developed for the 2012 Ferrari FF (Ferrari Four) a shooting brake that replaces the 612 Scaglietti. 4RM is an abbreviation from 4 Ruote Motrici which means 4WD in Italian.  The Ferrari 4RM 4 wheel drive system is a unique feature. The difference starts with the hardware as there are what can be considered to be two drivetrains connected to the single-engine. A brief explanation of the engine, transmission(s), and drivetrains of the Ferrari FF are as follows. The car has a front-mid mounted engine with the driveshaft connected directly to the rear of the engine and runs to a seven-speed dual-clutch transmission at the rear of the car directly between the rear wheels. Connected to the front of the engine are a power transfer unit (consider it a miniature automatic transmission) with two forward gears and one reverse. The power transfer unit also has two wet clutches with a clutch assigned to each wheel. So there is one drivetrain connected to the rear of the crankshaft and another drivetrain connected to the front of the crankshaft 4rm drivetrain.

The seven-speed transaxle drives the rear wheels while the power transfer unit drives the front wheels. The first front gear works together with first and second gear at the rear while the second front gear works together with the third and fourth gears of the rear. The power transfer unit shifts into neutral for the fifth, sixth, and seventh gears of the seven-speed dual-clutch. Reverse works together with the reverse gear at the rear. The clutches that drive the front wheels were designed to be constantly slipping thereby allowing the two forward front gear ratios to run smoothly with the four gears they correspond with at the rear. A huge benefit of the 4RM system is weight reduction. The system used to power the front wheels weighs 90 pounds which is less than half of the weight the extra parts used to make up a conventional four-wheel-drive system weighs.

The entire method used to set up this system contributes to the excellent weight distribution of 47/53 percent front to rear. The 4RM 4 wheel drive system is also relatively symmetrical on the left and right sides of the car.  Another benefit is torque vectoring. The separate front clutches allow more torque to be sent to anyone of the front wheels. It's not the most common form of torque vectoring but it still works well. This drivetrain allows the FF to easily drive around on the snow and Ferrari indicates that the front wheels receive power only when 4WD is required so the car should operate as a rear-wheel-drive on dry asphalt. However the Ferrari 4RM system is viewed by the automotive world, their engineers should be commended.

The Ferrari 4RM all-wheel-drive system (4-wheel drive), first introduced on the Ferrari FF and now on the Ferrari GTC4 Lusso with the addition of four steering wheels (4RM-S Evo), is an innovative, extremely complex and production system. owned by Ferrari itself.

The complex system, instead of using the classic 3 differentials (front, rear and central) that are usually adopted by common four-wheel-drive systems, adopts a single rear differential integrated with the dual-clutch gearbox and seven ratios in a transaxle configuration and one PTU (power transfer unit) front that is a sort of small automatic front gearbox with two forward ratios and a reverse gear ratio.